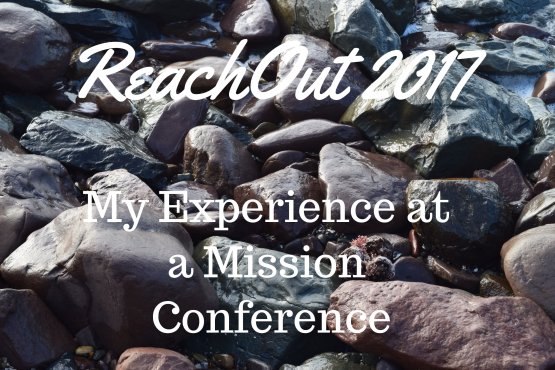 How’s your weekend been so far?

My post today is going to be a little different. For one thing, it actually has nothing to do with books or writing or any of the usual things. I want to help you get to know me a bit better through this post. A fortnight ago, I got the chance to go to a missions conference, which was fantastic. Today, I’ll share a little about the conference and it’s amazingness.

Here’s something you may not know about me. I want to be a missionary. As much as I love writing, and as much as I feel that God is calling me to write, it’s not actually what I want to spend my life doing.

When I was eleven or so, I listened to an audio version of Hudson Taylor’s Spiritual Secret. This was an amazing, life changing book (go read it now, all of you!) and I decided I wanted to be a missionary to China (because that was obviously where missionaries went, nowhere else needed missionaries in my mind). Fast forward, six years and here I am. I don’t want to go to China anymore, I want to go to Arnhem Land, in northern Australia and work there with the Aboriginal people as a pilot.

Anyway, I was given the opportunity to attend the 2017 ReachOut Conference in Katoomba from the 9 to the 10 of September. A dear, dear friend of mine, Sarah, and I were taking up by a beautiful lady who has taken immense interest in our desire to be missionaries.

This conference was amazing. That’s the only word I can think of which adequately explains the way God worked at this conference. Over the weekend, there were two speakers, Mike Hey from South Australia and Paul Borthwick from Boston, USA. Both of them gave fantastic messages which were challenging, encouraging and inspiring. Their theme was Jars of Clay, taken from 1 Corinthians 4: 7-9, which talks about God having placed His treasure in Jars of Clay (meaning us), I got so much from these talks and made a lot of notes. The band was great and sang so well. I met so many missionaries and people passionate about cross-cultural ministry. I also got the opportunity to talk with three different bible colleges about attending college after I finish school. I even met a pilot with Wycliffe Bible Translators, so that was a highlight.

Everyone was so encouraging and inspirational, they were so ready to listen, to hear your stories, to offer advice and share their immense wisdom and experience.

Saturday was really full-on. We listened to three talks and attended two seminars. The first seminar, which both Sarah and I attended, was about working together in teams on the mission field. It was a panel discussion and each of the people on the panel had a lot of advice and personal experience to share about working with different people, working across social, culture and language barriers, and resolving conflicts that arise.

The second seminar I attended, also a panel discussion, was about serving God on the mission field even if you weren’t “qualified”. It’s a popular misconception we tend to have that God can only use pastors, doctors and teachers overseas, something which is simply not true! Every member of the panel did a job in another country (all of them worked in Asian countries where Christianity is discouraged or forbidden entirely) that isn’t usually seen as “missionary job”. Working in the coffee business, for example.

Sarah attended a seminar on reaching out to people of the Buddhist religion. That’s a topic she’s very passionate about and it was lovely to hear how excitedly she spoke about it afterwards!

On Saturday night, after the sermon, Paul Borthwick gave an invitation to everyone who felt called to work in cross-cultural ministry, whether that was overseas or in Australia. It worked like an altar call, those who stood up could go to the back of the room and receive prayer from a mission agency representative. Both I and Sarah stood up and I received prayer from a lady who worked with AIM (Australian Indigenous Missions) and that was really encouraging.

Basically, it was an emotional weekend, full of so much prayer, information and encouragement and I’m still trying to work it out and pray over it. If you’d like more information on this, let me know and I’ll do a more in-depth post on it.

What about you? Have you ever been to a missions conference? Would you like to hear more about it? I’d be more than willing to tell!