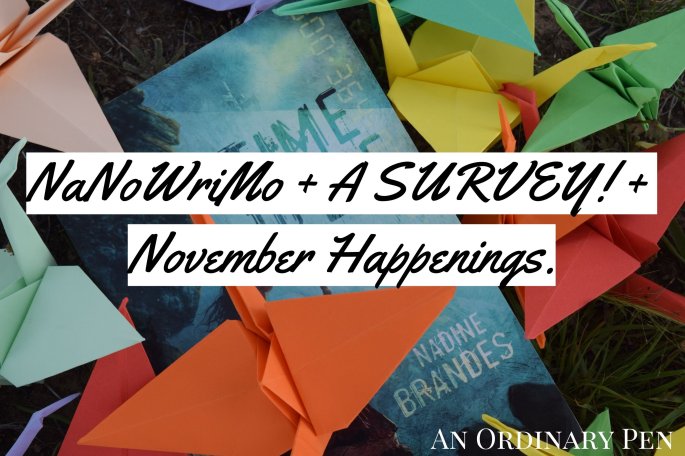 And I, uh, wrote 80,000 words, because apparently I don’t value my sanity. However, I worked so hard this month and I feel really satisfied. I also feel kind of annoyed because I’m 80k into my novel and I’m estimating that it will need at least 25k to get me to the end, maybe even more. So far, this is the longest novel I’ve ever written. I’ve also spent over 96 hours slaving away at this novel. I’m braindead now, but I am determined to have this novel finished before December 31st.

Other than Stars Fill Infinity I haven’t done any writing, but I think I can be excused for that. Black and White is no closer to being edited, so, yeah… 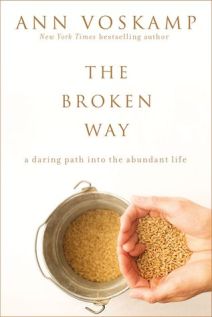 The Broken Way by Ann Voskamp. Simply amazing, this book was literally life changing. I don’t even know what to say about it, except go and read it! Ann Voskamp addresses really well the way Christ broke Himself for us and how we should do the same. Grace @ True and Pure wrote a review on this book, which was what prompted me to buy it, so go check that out! Five Stars!

Joan of Arc: Heavenly Warrior by Tabatha Yeatts. I read another book about Joan of Arc, since I’m sort of obsessed with her. This one wasn’t as indepth (or awkward) as Mary Gordon’s biography,  which I read last month, but it was still pretty good. Three stars.

Jobs and Industries by Nicolas Brasch. Another book for research. This one was kind of boring. Two and a half stars.

The Scarlet Pimpernel by Baroness Orczy. This was a fun, light and quick read! It has a very superhero vibe, despite being a classic, and I liked the way the romance weaves it’s way through the narrative (that’s a big deal for me, since I’m not a romance person). It wasn’t nearly as deep as other classics I’ve read, but that made it kind of a relief. Four stars.

The Legend of the Wandering King by Laura Gallego Garcia. This was an impulse buy from a book fair in September. It was pretty good. It had an Arabian nights feel, and I liked the fairy tale/legends aspect. Over all, a fun read. Three and a half stars.

Out of the Curse by Gabrielle Massman. I need to mention this book, because I beta read it during November and it was just amazing. It’s not published yet, but trust me, when it is, I will be recommending it to everyone. It was by far the best fiction read of the month. Five Stars.

Young Digger by Anthony Hill. This book was also amazing. It was an biographical novel about a young French boy, Henri, who was adopted by an Australian flying Squadron. He’d been orphaned during the fighting in France, so one of the soldiers decided to take him home to Australia and give him a new family. So sweet and completely heart shattering. Five stars.

Dayuma: Life under Waorani Spears by Emily Ethel Wallis. I had a lot of five star reads this month and this was another one. Most Christians would know the stories of Jim Elliot and Nate Saint (if you don’t, what are you doing here? Go and look them up!) but less people know the story of Dayuma, the Waorani Indian woman who helped them reach the world’s last Stone Age tribe. The things this girl went through and endured are beyond imaginable. Almost her entire family was murdered, her husband and son died of foreign illnesses, and all she wanted was revenge for the murders of so many of her family members. Fortunately, God reached her with His forgiveness, leading her to forgive the killers of her family and determine to reach them with the Gospel. An amazing read that made me cry. You must read this! Five stars.

The Hunchback of Notre Dame by Victor Hugo. This was…uh, not what I was expecting. Les Miserables pushed Victor Hugo to one of the top spots in my favourite authors list, so of course I was going to read Hunchback. And, um, I still don’t know what to think of it. While the title would suggest that Quasimodo–the hunchback–is the main character, the main character of this tale is really the cathedral itself. I don’t even know what to rate it, so…

December is going to be a super month of blogging. I’m going to be doing two posts a week–one being my usual post (on Wednesdays or Thursdays, instead of Saturdays though)–and the other being a series I’ll be running for the five Sundays of the month. The series will focus on the things God has taught us through the ups and downs of 2017 and it will feature four different guest bloggers (and then myself). So, keep a look out for that!

I’m also running a survey! I need to know what people enjoy reading on my blog, what they’d like to see, what they don’t want to see, what I could do better. Please take two minutes to fill it out (self promotion 😛

Watching the second season of Supergirl with my family. It’s going downhill fast. I don’t even know if I’ll finish it. I wouldn’t really recommend this, whatsoever.

Listening to the wonderful sound of rain on a corrugated iron roof! Usually we get a lot of rain in winter, which prepares us for our long and hot summers. We didn’t get that rain this year, which caused a lot stress for farmers all around Australia. God has amazingly provided us with rain which is slightly out of season though!

I had yet another dance performance a few weekends ago, which went really well! I also went to a basketball game with St John Ambulance. I found the games pretty boring, but luckily I took The Hunchback of Notre Dame with me, so I got a lot of reading done.

I read so many wonderful blog posts this month, but here’s a few that I really enjoyed: Hailey Hudson Talks about her Tutoring; She also talked about her October (she even talked about my Newsies post! She’s so sweet :D); Audrey Caylin wrote an amazing post about Creativity ;  NADINE BRANDES REVEALED THE COVER FOR HER NEW  NOVEL FAWKES!!!  It’s pretty much the most amazing cover I’ve ever seen!; Paperfury announced her DEBUT NOVEL!!!! (actually, that might have been in October? Who knows, it’s exciting either way!); and the Friendly Neighbourhood Pizza Ninja (aka, Jane Maree) did the Blue Sky Tag and told us all about herself.

I watched Hacksaw Ridge with my parents and brother. Oh my goodness, this movie!! 10/10 recommend it (warning though, this movie is rated MA and it extremely gory in some parts. I skipped over those parts, because I knew I wouldn’t be able to handle them, so if, like me, you can’t really handle blood and violence to that extreme, maybe enter with caution?) However, it is a great movie, and a testament to the power of our God.

Making origami cranes with my sister. You can see some of said cranes in the header!

Finally, an exciting announcement! I am going to be working on my author’s platform next year, in preparation for some publisher querying. Stay tuned for some epicness (maybe!).

Finally, my little sister told me that in “only three years you will be twenty and you’ll have to grow up and act half-sane”.

Here, as a passing gift, for being such loyal readers and making your way through this post (I assume you did anyway, maybe you just skipped to the end, I don’t know), here’s a cute spider for you. 😀

How was your November? Did you do NaNo? Are you already for Summer (or Winter?)