Well, ladies and gentlemen, it’s already February! Can you believe it? Nope, me either. So I’m going to update you today on how my January went.

So remember how I was going to completely rewrite Jihi during the school holidays? I started. I wrote a thousand words, and then I realised that I didn’t want to write it anymore. It’s an old story, I’ve continually thought about it, rewriting and rewriting it, sometimes mentally and sometimes literally. And it had lost all its freshness. The story will always be with me as one of my first serious novels, but I feel it’s time to move on from it. I want to put it aside to focus on Rose Mask, The Stars Fill Infinity and the sequels.

So, that’s what I’ve been doing! If you’ve been following my posts over the last few weeks, you’ll have seen a few of my projects which I hope to focus more on in the coming year! And you’ll know that I’ve been outlining the sequel to The Stars Fill Infinity, *cue excited fangirling and squealing*.

The Bamboo Cross by Homer E. Dowdy. Really interesting! I was reading this as part of my devotionals, but I took it with me when we went on holidays, and I found the second half so gripping that I read it in a day. It was about the mountain tribes of Vietnam during the Communist upheavals. I was expecting “Just” a missionary book, but this book’s focus was on two of the native pastors, Sau and Kar and their ministry among their own people, rather than the white missionaries. Five stars.

The Lost Sapphire by Belinda Murrell. I had mixed feelings on this book. For one thing, it was a historical novel set in an era which I don’t usually see written about–Australia during the ’20s, focussing particularly on the Russian refugees who flooded into Melbourne after the revolutions in Russia. On the other hand, it was lacking in life, and the characters could have used more depth. There was also a plot twist concerning the main male lead, Nikolai–a young Russian chauffeur, which I saw coming from a mile away, so it could have used some originality. Three stars.

A Tale of Two Cities by Charles Dickens. *Squeals* I feel that most people already know my feelings on this book. If you’re still unsure, I wrote a whole review on it! Five hundred thousand stars.

The Phantom of the Opera by Gaston Leroux. Odd, is the only word to describe this book! I liked it, but it was super strange sometimes. Hopefully, I’ll put up a post this month concerning the book, musical and movie! Three and a half stars. 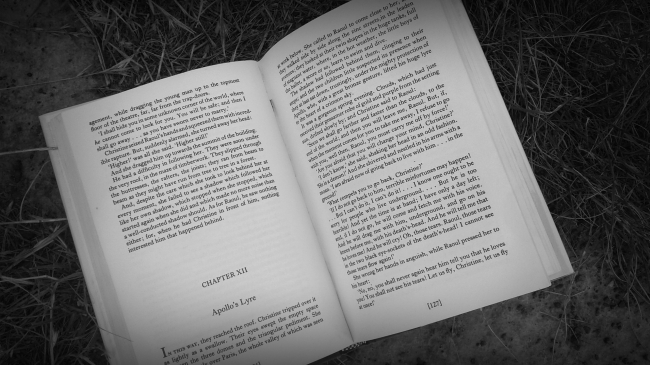 The Fall of the Blade by Sue Reid. In my opinion, this was really badly written. It was a French Revolution story, which was why I picked it up, but it was written in a diary format, which I usually find really annoying. That aspect turned out exactly as I thought it would. The characters also felt flat and unoriginal. And then it just…ended. There was no closure whatsoever. It had a lot of potential, but it ultimately disappointed. Two stars.

Jane Eyre by Charlotte Bronte. I loved this! I listened to the whole thing as an audiobook in one day, fell in love and then…realised that it was abridged. This would never do! I never read abridged books, so I got the unabridged version out from the library. I’m over half way through it now and loving it still :). Four and a half stars. (I think the half star that I retracted was because Mr. Rochester is in it, and I don’t like Mr Rochester all that much, but Jane deserves every little bit of that four and a half stars).

I Will Repay by Baroness Orczy. This is another one of Orczy’s books concerning the Scarlet Pimpernel. I liked this one a lot, but not quite as much as The Elusive Pimpernel. This one was focussed on one of Marguerite’s friends who appears in The Elusive Pimpernel, namely Julliet de Marny. It was interesting to have a different storyline and different characters (even though Percy did, of course, make an appearance in order to save everyone from untimely deaths at the guillotine). Four stars.

Sense and Sensibility by Jane Austen. Again, this was abridged and left me totally and utterly confused. I’m choosing to believe that this was because of bad abridging, so I have the unabridged version ready to read after I finish Jane Eyre.

Cress by Marissa Meyer. My favourite of the Lunar Chronicles yet!!! I loved this book. Cinder was good, Scarlet was a bit ‘meh’, but Cress was brilliant. And Thorne and Cress are the sweetest things ever. My absolute favourite line from any of the books was this one:

Once and Then by Morris Gleitzman. My reaction on finishing these two books was “Well, I didn’t need a heart anyway”. Once tells the story of Felix, a Jewish boy in Nazi-Occupied Poland, and Zelda, the daughter of a Polish Nazi murdered by the Polish resistance. It was funny and tragic at the same time. Then continued their story, and it just shattered my heart. Five stars for both of them.

The Russian Revolution by Jessica E. Piper. This was research for When Infinity is Empty, it was fairly interesting, but a lot of the political aspects went over my head, and there were so many names to remember. It was a bit hard to keep track of who betrayed whom, and who liked whom and who was allied with whom. Still, it was informative and I learnt a lot. Four stars.

So, twelve books altogether, not a bad reading month.

I also managed to tick four books off my Great Classic Quest. The Phantom of the Opera; A Tale of Two Cities; Sense and Sensibility and Jane Eyre (though both of these were abridged and I am reading the unabridged versions as well). I was originally planning to read A Christmas Carol and The Three Musketeers this month, but I never got around to it.

Pride and Prejudice (Keira Knightley version). Very pretty adaption, and the costumes were stunning. I though Knightley’s acting was very good and I really loved the portrayal of Bingley (my favourite scene was Mr Bingley practicing his proposal! I love Mr Bingley 🙂 ). I felt that Matthew MacFadyen didn’t really get Mr Darcy right though. It’s not secret that I’m no a fan of Mr Darcy, but this particular portrayal of him just didn’t fit, he seemed too soppy and not…brisk enough. I don’t think that’s an accurate way of putting it, but I can’t think of any other way to put it right now. Three stars.

The Hobbit: An Unexpected Journey. I know that the Hobbit franchise has been much criticised, but I actually quite enjoy the first film in the trilogy. This was a rewatch with my mum and brother. I really like Martin Freeman’s portrayal of Bilbo Baggins, because I think he gets it exactly right. I’ve always been of the opinion that Thorin behaves too much like Aragorn, and yet fails to be Aragorn in these movies. He’s not “Thorin-ish” anymore, which I think is a shame. I do like Balin though, and they way they’ve expanded his character a bit more. Four stars.

The Hobbit: The Desolation of Smaug. This suffers a few more faults than An Unexpected Journey, there’s just so much added material which I feel weakened the plot lines. Fighting in barrels, elves everywhere, Legolas and Tauriel, neither of whom are in the book, dwarf/elf romance, etc. However, the scenes in which Bilbo attempts recover the Arkenstone are really suspenseful and chilling, and I decided when watching them the other night, that they were some of my favourite scenes in all three movies. I also like the way it explored Gandalf going to Dol Guldur, which is mentioned briefly in the books, but never expanded upon. Three and a half stars.

Jane Eyre (2011 version). I really loved Jane Eyre, as mentioned above, but I found this movie quite dull. I don’t think it was bad, it was, like Pride and Prejudice, really beautiful and it had a good atmosphere, and I thought Michael Fassbender made a good Mr Rochester. I didn’t think Mia Wasikowska really represented Jane to me, she just seemed too severe and grave, and while Jane might appear severe and grave, she isn’t really, and I don’t think that was adequately portrayed. My main issue was that one of the paradoxes of my entertainment life is that I’m happy to spend hours reading “Boring” books, with lengthy descriptions and lots of romance, but a two hour length movie of the same thing is just too much. Three stars.

To musicals of course, because I listen to nothing else.

Anastasia: The Original Broadway Cast. Because it awesome. Nothing else need be said.

Les Miserables. Same as above, I’ll never ever get tired of Les Mis. I shudder to think how much of my life has been spent listening to varying versions of this particular musical. Still, I love it’s themes, it’s music, it’s lyrics, it’s general aesthetic!

Les Miserables, French Concept Album. I’ve been branching out into French musicals. Which is strange, since my French is very rudimentary. Still, I really enjoy listening to this

Elisabeth. This is a German musical which is MyMusicalTheatreLife’s favourite musical, so I thought I would give it a go, even though my German is not very good. I’ve really enjoyed listening to it so far, and I quite like the music!

A Tale of Two Cities. Yes, I brought the international cast recording and I love it, it’s one of my favourite musicals!

Alas, my sister has been away for the past week and a half, and I have no one to squeal about musicals and Ramin Karimloo with. Super depressing.

Not much, because, hey, it was school holidays! However, we did do a few exciting things. Like, we visited an arboretum (and saw a lot of beautiful bonsai), which was amazing. Here, let me photo dump you.

I actually have been here before, with a group of 80 high school girls, about two years ago. They were all incredibly bored by a place full of trees, but I honestly rated it higher than the trip to the massive shopping mall. I guess that’s the kind of girl I am.

For New Year’s, we visited grandparents and hung out there and I read a lot and it was very hot. By the way, the temperatures have been awful lately, though for the first couple days of February we’ve had a sort of cold spell.

St John Cadets went back, and I spent Australia Day hanging out with them on duty.

Had coffee with a dear friend (that’s not literal coffee, since neither of us are coffee drinkers).

Missed hanging out with my sisters and watching Les Mis.

Started on an epic Hobbit/Lord of the Rings movie marathon with my mum and brother.

Dancing hasn’t started back yet, but I’m eagerly waiting! I’ve also spent a good amount of time this month strengthening my legs and ankles and improving my flexibility.

Other than that, it’s been a quiet month, which is really good since December was crazy and school starts back for me on Monday.

How was your January? What did you get up to? Do you like bonsai? Have you ever visited an arboretum?

28 thoughts on “Well, January Is Done–How Did That Happen?”