This is a deep question. I have no idea. I would like to have a few books published by then, and maybe have my pilot’s license. Maybe in ten years I’ll finally have conquered my TBR too! One can always hope.

2.   Would you rather have a magical book that gives you exactly what novel you want to read at the right moment, or a magical plate that fills with whatever food you want to eat?

A magical novel! Can you imagine it? no more reading slumps or bad novels ever, ever again! It’d be glorious. Food is always second to good books.

The Manettes (I love the close relationship that Lucie and Dr Manette have, and the way they welcome others into their family circle, I’d feel right at home with them), the Pevensies (they are among the best portrayed siblings in fiction and I’d love to have Peter for a big brother, and Lucy as my little sister), the Valjeans (that sounds so weird, doesn’t it?) and be a sister to Cosette, or the Marchs and have Meg and Jo and Amy for sisters.

4.Who is your favourite author, and why?

I was asked this question in a previous tag, so I’ll just copy the answer I gave for that.

Okay, for the sake of the post, I’m going to name my favourite authors as J.R.R. Tolkien and Victor Hugo. I like them both for similar reasons.

They both write compelling stories, that are so deep and the world building is so thorough. Tolkien really thought out Middle-Earth, to the point that it almost is a real place. It’s so easy to vividly picture Middle-Earth. And Hugo’s Paris too, which might as well be a completely different world. They also have beautiful characters, who are easy to love (or hate) and to root for. Their themes are deep, thoughtful and biblical.

5.If this was the last year of your life, what would you do with these last precious months?

Well, this is the question that Parvin struggles with in A Time to Die. Like her, I would probably write my biography. I would put all my things in order and give them away to whoever I thought needed them most. I’d give my journals to my mother (to read and then I would ask her to pass them on to my best friends). I would give up a lot of my activities, probably go off the internet forever and enjoy the seasons. Write lots of letters and then I’d plan my funeral. (You know how most girls plan their wedding? I know what songs I want sung at my funeral. Is that creepy? Let’s move on). And I would want to work on Stars Fill Infinity until it was finished and get it published.

6.What kinds of music do you listen to when you’re writing? Exercising? Just hanging out?

When I’m writing, I like soundtracks, either from movies or musicals. When I’m exercising, I usually listen to audiobooks. When I’m hanging out, I like musicals (haha, I listen to nothing else) or audiobooks.

7.If you could meet any famous person, who would it be?

Living or dead? It’s much easier to choose between living people. I would love to meet Katie Davis Majors, because she’s very cool, or Steve Saint. Or Joni Eareckson Tada. If it was someone dead, I would want to meet Nate Saint, Eric Liddell or Hudson Taylor. Or Wilbur, Orville and Katharine Wright, or Baron Manfred von Richthofen (so I could interview him and write a novel).

8.If you could stay at one age for the rest of your life, what age would it be and why?

Not seventeen, that’s for sure. Everything seems much more complicated when you’re a teenager. I think I would want to be twenty-five. Something about that age has always fascinated me, I don’t know why.  I’m sure once I’m twenty-five I won’t feel the same though.

9.What is your favourite childhood memory?

Um, I don’t know? I have a lot of good childhood memories, but I don’t think I can choose one particular one.

Accepted a dare to climb a very tall tree with bare feet in the rain. And got stuck, because it was slippery and easier to get up than down when slippery. Jumped a hurdle in foam clogs (sprained my ankle doing that), and got hurt. Got run down by a bolting horse (not my fault, so I’m not sure if it counts). Volunteered as tribute for a friend and ended up having whipped cream and several cans of baked beans poured on my head, to the great delight of a callous group of five-to-twelve-year-olds. 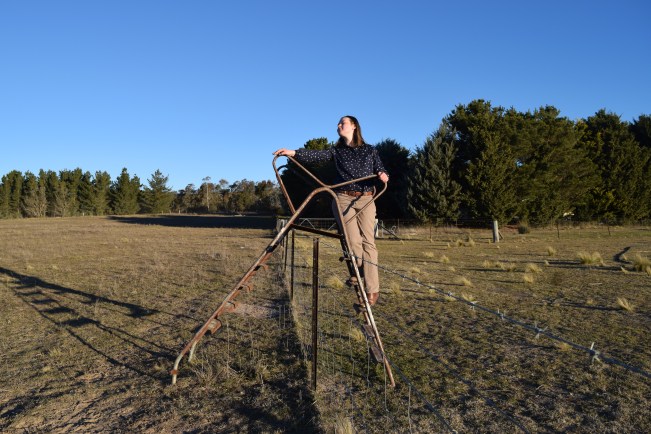 11.If you had a million dollars, what would you buy?

A plane. Or two. Maybe a restored WW1 Fokker or a Spitfire. And then I’d donate whatever was leftover to the Mission Aviation Fellowship, who I want to work for once I have my pilot’s license.

1.  What was 7th grade like for you? (assuming you’re older than 7th grade)

To be honest, I’m in Year 12 now and I can’t remember Year 7 very well. I think I was really excited because all my friends (who were older than me) had already gone to high school and I was finally following! Other than that, I don’t remember.

2.  What’s the best pet you’ve ever met that didn’t belong to you?

One of my best friends has a kelpie sheep dog, called Lucy and I would say that she’s my favourite pet who doesn’t belong to me.

But Maximus the Horse is pretty cool too. As is Pascal.

3.  Who is someone underrated who should be famous?

Oh so many! Wilbur Wright is one of them. Even though he literally built the world’s first practical aeroplane and flew it, hardly anyone seems to know about him. And Katharine Wright, his sister, is also awesome and we always talk about the “Wright Brothers” when we should be talking about the “Wright Siblings”.

I’m a voice for those who have been forgotten by history. There are many I would love to have better known—Eric Liddell, Nate Saint, etc.

4.  What do you do to feel better when you’re having a bad day?

Write a story. Listen to musicals or pray.

5.  What’s a song that you like that no one else seems to?

I honestly don’t know! Actually, I do. One of the songs from the Anastasia soundtrack Stay, I Pray You, isn’t very popular in my house, but I really love the haunting, sad sound of it.

Of course. I wouldn’t need a pilot’s license then 😀

All right, time to embarrass myself. When I was very small, I had a blanket which was my inseparable companion. I loved it very much (and it even had a name—Bindi, apparently a mispronunciation of Blanket), and even though it’s threadbare and very sad, it’s still on my bed. By far my favourite blanket. I do also have one that is massive and thick and snuggly, but just thinking about it right—in the grips of oppressive summer heat—is making me sweat.

8.  If you were a weather, what weather would you be?

Autumn weather, warm days and cold nights. I can be warm and friendly, but when I am tired or worn out or upset I can be quite frosty and snappish.

Wow, that was very poetic.

I tend to use a torch, to be honest with you, and I own neither lamp nor nightlight.

A little girl who is in my group at Girls Brigade. She happily announces every single Tuesday that she’s having tacos for dinner (Taco Tuesday, apparently).

11.  What’s something unusual that makes you happy?

I don’t know if it’s unusual, but I love the look of crisp, pretty new notebooks without any writing in them yet. And that makes me very happy. I also like the sound of rain on corrugated iron roofs.

Thank you to Katie and Cas for nominating me! I’m just going to blithely ignore the rest of the Liebster Award rules, but if you wish to do it, feel free to steal these lovely questions!

What’s the craziest thing you’ve ever done? Did you have an inseparable companion when you were little? Do you still have one (come on, I embarrassed myself, be honest!)?

36 thoughts on “The Liebster Award (For The Third and Fourth Times. I am Popular!)”