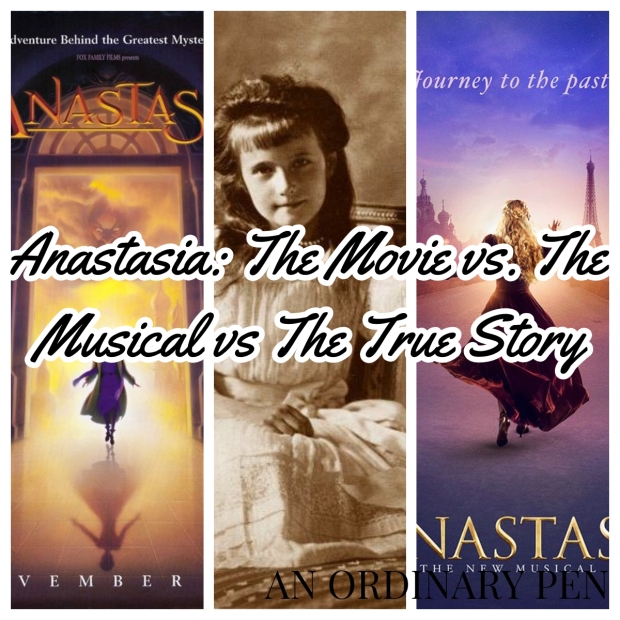 This is part three of a series that I’ve been running for the month of February, where I compare popular books with their musical and movie adaptions, looking at their similarities and differences. Today, I’m looking at the new Broadway musical Anastasia, the animated movie it was based on, and in a departure from what I usually do, the real life story that inspired them.

I remember the first time I came across Anastasia Romanova, the famous grand duchess of Russia. When I was young (read: nine, ten, elevenish), my obsession was princesses and queens. I was never, ever a Disney princess type of girl, nope, I was going to read the gritty stories of real life queens and princesses. There was one particular series of books I enjoyed, which were written in a diary format (My Royal Diary, maybe? I’m not sure of the name) and in this series I eagerly devoured stories of Cleopatra, Queen Victoria (and a Princess Victoria too), Marie Antoinette and, of course, Anastasia. I wasn’t even aware of the movie based on her story though, she was just another fascinating historical figure who died in a similarly horrific way to Marie Antoinette (who I felt significantly more sorry for, I don’t know why).

Despite how much I like the 1997 animated movie Anastasia, it has very little regard for actual history, and while the musical based on the movie does strive to be closer to actual history, it still isn’t completely accurate. There’s also another problem: after the Russian Revolution and the eventual Communist take over, Russian history got all muddled up and so the stories that are out there are often confused and contradictory. It’s hard to sift through all the “facts” to find the truth, and that’s probably one of the reasons that Grand Duchess Anastasia’s mythology has persisted so fervently.

Anyway, I’m not going into the tiny little details which everyone fights about, just three major ways the movie and the musical depart from the real story of Anastasia Romanova.

This is the most obvious departure from history. In 1918, in a cellar in Yekaterinburg, all of the Romanov family (as well as several other members of their household) were executed. No one escaped, though in the decades that followed several young men were to masquerade as the heir, Prince Aleksei, and plenty of women were to claim to be one of the four duchesses–Tatiana, Olga, Maria or Anastasia. For some reason though, it was the youngest daughter, namely Anastasia, who captured popular imagination.

However, the execution of the Romanovs was covered up for some time, and their bodies dumped in a remote forest. The rumour that Anastasia and/or Aleksei had survived the massacre continued though, and was inflamed in 1920 by the appearance of  a woman, called Anna Anderson (though her real name was not known), who claimed to be Anastasia. After Anna’s death, DNA testing proved her not to be the long-lost Russian princess, but, as Anya says in the movie, “I guess every lonely girl would hope she’s a princess”, and Anna Anderson’s life was nothing if not lonely and harrowing.

In the movie, things go quite differently. While Anastasia’s “grandmamma” is staying with the family, their palace in St Petersburg is attacked by revolutionaries. A young kitchen boy, Dmitri, rescues the princess, the dowager empress, and Anastasia music box, from the revolutionaries by sending them through a secret passage way. After fleeing the palace, Anastasia and her grandmother attempt to leave Petersburg on a train, but Anastasia falls off, hitting her head and losing all memory of her life as one of Russia’s most privileged young women. (she’s also depicted as being a lot younger than the seventeen/eighteen years old she was at the time she actually died).

Eventually, Anya, as she is now called, reclaims her memories, thanks to Dmitri and the music box he has kept, and is reunited with her grandmother.

The musical styles things more accurately than the movie. (Though, just so you know, I have not seen the musical and my knowledge of it comes entirely from the Wikipedia synopsis and the Original Broadway Cast Recording). At the end of the musical, during the song Still/The Neva Flows (reprise), Anastasia challenges Gleb (a Soviet agent tasked with hunting her down and killing her) by saying “Do it! And I will be with my parents and my brother and sisters in that cellar in Yekaterinburg all over again!”. That line suggests that Anastasia was, along with the rest of her family, shot at in the cellar, though she obviously wasn’t killed. How she escaped is not really explained (however, there’s been a long standing theory that Anastasia was kept safe by the immense amount of jewels she and her sisters had sewn into their clothes, and that she may have been shot, fainted and escaped later on). It also portrays Anastasia as being the same age in 1927 (the year the majority of the story takes place) as she would have been had she lived that long.

Anastasia’s “little brother Aleksei” was the only son of the Tsar, and thus meant to inherit the throne upon his father’s death. Unfortunately, he was born a haemophiliac, meaning that the slightest cut or bruise could literally cause him to bleed to death. The tsar and tsarina coddled him and did everything in their power to take care of him, especially on the numerous occasions that he was ill. Eventually, the tsarina hired a “mystic” named Grigori Rasputin, who believed he could heal Aleksei (or at least, led the tsarina to believe that he could) and Rasputin became a favourite of the tsarina, and then of her daughters, particularly Anastasia. However, Rasputin wasn’t that great an influence on the tsar’s family (and consequently, on the Russia they ruled), and the tsar eventually asked him to leave their home, to put some space between them. It wasn’t long after this that Rasputin was assassinated. (On an unrelated note, The Two Towers movie extras include a feature claiming that Rasputin was part of Tolkien’s inspiration for Wormtongue. It’s an interesting thought, but I can’t really find any evidence for it. Still, in many ways, they are similar).

The movie kind of throws the real Rasputin out the window. Rasputin was definitely creepy, a fraud, and generally disturbing, but I’m pretty sure he didn’t sell his soul and put some ancient curse on the Romanov family. I’m absolutely certain he wasn’t waited on by an albino bat either.

Another criticism the movie tends to get is that Rasputin was dead before Anastasia and her family were killed, but this is actually an invalid criticism, since Rasputin actually is dead in the movie, and his spirit/ghost/curse trying to kill Anastasia.

As creepy as Rasputin was in real life, he doesn’t bear any resemblance (other than an eerily similar physical one) to Grigori Rasputin.

The musical wisely left Rasputin entirely out of it, putting in a Soviet general as the antagonist instead.

3.         General historical facts (that I’ve only put in here to show off my knowledge of revolutions)

The Empress Dowager (Anastasia’s “grandmamma”) did survive the revolution (but she didn’t live in Paris, I’ve heard it was either in Denmark, or in London, but I don’t know which is true), though she never offered a reward for the safe return of her granddaughter (again, conflicting reports. I’ve read that she accepted her son and his family were murdered and never believed the claims of people like Anna Anderson–she never consented to meet with that particular lady–or that she never believed they had died, thinking that was the Red Army covering up their escape, and thus didn’t believe Anna Anderson could be Anastasia either, since Anastasia was safe somewhere with her family, living incognito).

I’ve already mentioned Anastasia’s age, but I’ll bring it up again. She was born in 1901, and when she died in 1918, she would have been seventeen.

St Petersburg is referred to as Petersburg in the movie. There’s no mention of either name change.

In this movie, the Empress Dowager Maria is offering a large reward to anyone who can “bring the princess back”, so of course, two con men decide to find an actress willing to impersonate Anastasia…and they run into Anya, who just happens to actually be Anastasia.

She’s apparently eight in the movie, eight years younger than she was when the revolutions took place in 1917.

During the opening song, A Rumour in St Petersburg, Gleb, a Soviet general, proclaims: “The Tsar’s St Petersburg is now the people’s Leningrad!” (And this is actually proclaimed three years after the name was changed from Petrograd to Leningrad).

Like the movie, the Dowager offers a large reward and Anastasia is brought to her by Vlad and Dmitry, two compassionate and not-at-all-deceitful con men.

I’m not entirely sure how old Anastasia is supposed to be in the musical, but it seems she’s older than she is in the movie, maybe around the same age as she was historically. She’s definitely a woman, somewhat older than twenty-five, I think, by the time the majority of the story takes place. There’s no mention (in the soundtrack) of her being in an orphanage (only a hospital or something similar), and she already has a job as a street sweeper (whereas, at the opening of the movie, she is being sent to find a job).

Well, I have to say, I can’t really choose a favourite. Unlike The Phantom of the Opera, Anastasia’s life actually happened. It’s not about different versions of a story, it’s actual history…and being the complete and utter history geek that I am, I really don’t like it when history is played with (I’ve only read one alternate history novel that I really enjoyed, and forgive the faults of).

Despite that, I really enjoyed Anastasia (I would have loved it when I was really little, even though I wasn’t a princess-y type of person. It’s kind of sad that I hadn’t seen it until two months ago!). And the musical version of Anastasia is my third favourite musical …

There is something magical about Anastasia surviving the Bolshevik attempts to kill her and creating a new life for herself, but there’s also something horribly sad about it. Can you imagine watching your family murdered in front of your eyes? And having to live with that knowledge, that image, for the rest of your life?

I enjoy the Anastasia musical because it’s beautiful, the lyrics and music are amazing, and the plot is tight and complex (more so than the movie it was based on), but sometimes I wish it had been removed from the real story of Anastasia, so that it was entirely fictional.

I like the real story because it is history, no matter how much we may dislike it, and wish it was different.

Anyway, I can’t choose, so I leave it up to you!

Most of my information came from The Russian Revolution: A Hundred Years Later by Jessica Piper and The Russian Revolution: A New History by Sean McMeekin. If you’re interested, you can just do a Google search for “Anastasia Romanov” or “Romanova” (you’ll get results for both of those) and you’ll find plenty of results, ranging from factual, to okay, to basically-got-everything-wrong to downright weird and disturbing. If you’re really interested, search “Anna Anderson” and see what comes up. Have fun!

Did Anastasia lead you to the real story of Anastasia Romanova? or was it the other way around? What are your opinions on alternate histories?

20 thoughts on “Anastasia: The Movie vs. The Musical vs. The Real Story”