Hello there! Today, I’m really pleased to announce that I’m taking part in the blog tour for R.M. Archer’s new novel, The Mirror-Hunter Chronicles. And I’m very privileged to be able to interview her today, to get a few behind the scenes peeks at her writing process 😀 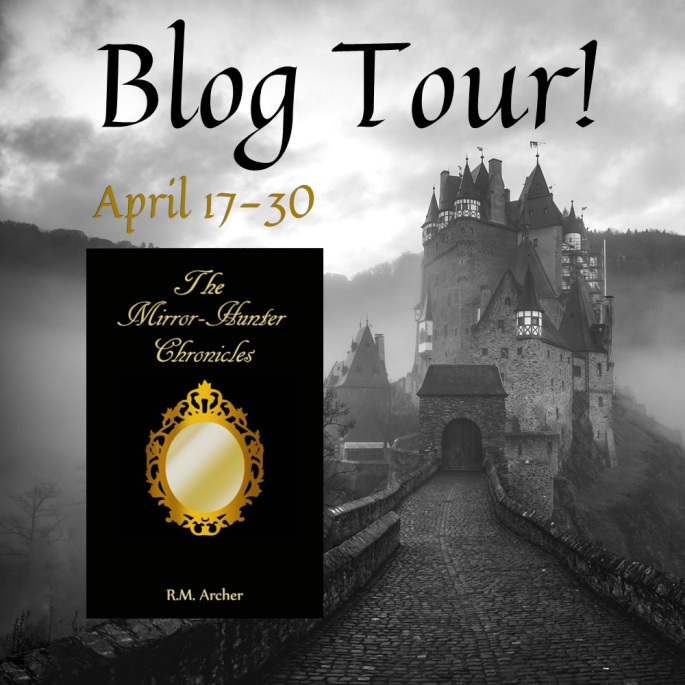 First up, what are three interesting things we might not have known about you?

That fact about the Sour Skittles is fascinating! I’ve never been able to do that 😛 Now, What does an average writing day look like for you?

There is no average writing day for me. What I write and when really depends on the day (which is something I’ve been meaning to fix for a while and haven’t gotten around to). Generally I write the most when I’m at work, because I only work four hours but I’m there for eight due to driving arrangements, so I get four hours of peace and quiet from siblings and I can pull out my laptop and write. On my best days I think I’ve written a little over 3k. But really it depends on the day, and lately my writing has slowed down some.

What do you do to stay motivated?

I try to remember the reasons I love the projects I’m working on and think back to why I started writing them in the first place. I try to harness the excitement from when I first started the project and apply it to my current writing. It doesn’t always work, but it does often enough to keep coming back to it.

That’s great advice, I’ll definitely try to remember that next time I’m struggling with motivation. What’s one place or thing you keep coming back to for story inspiration?

Pinterest, usually. Between writing prompts, potential character images, fantasy artwork… it’s a treasure trove of inspiration. And I usually have story boards on there that inspire me to get back into my main projects.

Haha, Pinterest—the scourge and blessing of writers. Which character arc in this book was your favourite to write?

Which character arc… Ilene’s, I think. I think she’s the one with the most evident arc. Solem would be second.

What was the strangest thing you had to research?

For this book I didn’t have to research much of anything. Over the course of all my writing, though, brain-dwelling parasites was probably the weirdest thing.

Brain-dwelling parasites are definitely weird…probably also a bit icky to read about, I can imagine. What would be some comparative titles for The Mirror-Hunter Chronicles?

A Series of Unfortunate Events is the big one. And I think I’d say the Beaumont and Beasley series by Kyle Robert Shultz (fabulous books, you should definitely check them out). I’m not sure what else.

Is there a specific Bible verse you associate with this book?

Not especially. Only a couple of my books have Bible verses associated with them, but I aim to keep 2 Timothy 2:15-16 in mind for all of my writing: “Be diligent to present yourself approved to God, a worker who does not need to be ashamed, rightly dividing the word of truth. But shun profane and idle babblings, for they will increase to more ungodliness.”

That’s a great verse to remember. I think I might put that one up on my writing whiteboard, so that I don’t forget it. What’s your favourite thing to do when a scene/character/etc just isn’t working?

I tend to go to Pinterest. If I have a board for the story or character that’s giving me trouble, I start there and look for inspiration from what I already have. Oftentimes if a character isn’t working it’s because I haven’t developed them well enough, so hunting down pins for a character collage is often helpful for getting to know more about them. If I don’t know what to do next in my plot, I look for writing prompts and aim to work them in (which often forces me to stretch in a new direction). Pinterest is just great for writing help.

Ah, Pinterest again! Why do you feel this world needs more Christian novels/novels written by Christians?

I don’t necessarily feel we need more “Christian novels.” That often means blatantly Christian, with a set, miracle-giving God-figure and at least one conversion scene. Not always, but often. These need to stop coming because they almost always portray an inaccurate picture of God and Christianity, and I don’t think Christian writers have to write “Christian novels.” However, I definitely believe that we should have more Christian writers who aim to show their faith and glorify God through their writing in more subtle ways. You can write Christian themes like forgiveness and unconditional love into a story without it being preachy. (Check out Story Embers if you want to read more about writing fiction well as a Christian.) And I definitely believe we need more books told from a Christian worldview. Books that handle issues that the world sees as inconsequential with the gravity they deserve, that show hope, and that feature role models (especially in the YA department) that can be emulated in good conscience and reflect healthy character traits and active work toward overcoming realistic flaws. I’ve read multiple books lately that have been filled with darkness–which is fine, darkness is real and shouldn’t be ignored–but didn’t show hope in the end, or were excessive in showing the darkness, and I think we need to combat that and show that yes darkness exists, but light also exists, and light will always win, even when it doesn’t feel like it.

I’m going to stop there, because otherwise I’ll write a whole essay, lol.

Thanks so much for stopping by, R.M.! I look forward to getting my hands on a copy of The Mirror Hunter Chronicles. 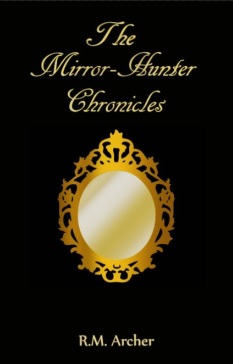 All the fairytales you’ve heard are wrong, but I’m here to set the record straight.

I’m Solem Anders, Mirror-Hunter, and this is what really happened.

A Series of Unfortunate Events meets Disney in this short story series as Solem Anders pursues a volatile magic mirror across Farilin, seeking to destroy it and end its trail of tragedy. But when princess Eira steps in his path and enlists his help to overthrow her mother, he is lured into her Pack by the promise of information. Is this the shortest path to the mirror, or just a treacherous diversion?

With the mirror barely out of reach, Solem’s time is ticking away, and he’ll lose far more than a princess when the clock strikes.

R.M. Archer has been an avid reader since she was a toddler and has always been a lover of story. Her first exploration of the other side of the page was a mystery at age seven, and though her preferred genre has changed, her interest in writing has not. She’s a homeschooled teenager living with her family in northern Virginia.

Have you read The Mirror Hunter Chronicles yet? It releases tomorrow, so you better get onto it if you haven’t! Are you a fan of A Series of Unfortunate Events or Beaumont and Beasley? What do you do to stay motivated?