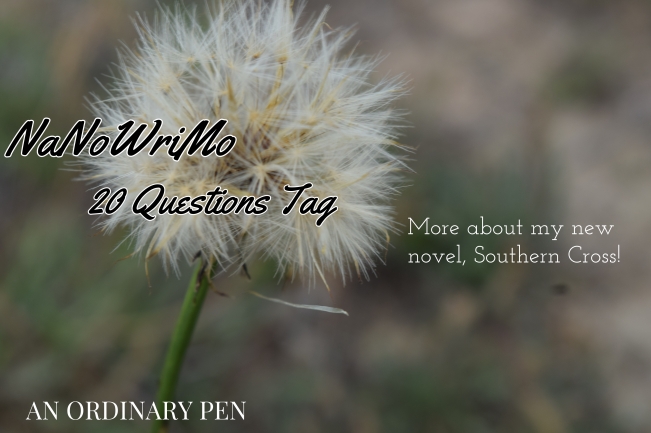 NaNoWriMo is upon us! In Australia, we’re five days in, and so far its been going splendidly 😀 So today, I’m here to bring you a fun tag that Jenna tagged me for and then I’m going to get back to writing!

01. Tell me about your NaNoWriMo project this year! Give me a blurb!

My blurb is kind of dodgy, but here it is anyway!

The war has raged for three years…and it doesn’t show any signs of slowing up. The boys are dying like flies in the trenches, and Amy’s brother Curt, previously declared medically unfit, is suddenly accepted into the fledgling air force.

Pearl has German heritage–a fact that never bothered anyone until the declaration of war. Now, three years later, she knows her time is running out before she is arrested and placed in an internment camp.

Amidst a world brimming with blood, death and chaos, two women must find a way to hold onto peace, no matter what it costs them.

Historical fiction! If we want to be super specific, it’s New Adult Historical Fiction. Or something like that. Its not YA, that’s for sure. But I don’t feel qualified to write actual Adult, so I guess I’m going to go with New Adult. It deals with a lot of NA themes and that sort of thing (I’ve just left out the sex and swearing NA is infamous for).

03. Describe your MC in three words.

04. Without spoilers, describe your villain in three words.

There isn’t really a villain at all. 😛 So…I might just skip this.

Officially, I’m just doing 50k, but I’m thinking this novel will be about 70k. If I got it all done in November, that’d be awesome, otherwise, I’ll dedicate December to finishing it off. So I’m unofficially aiming for 70k.

06. Is this your first draft? Second? Third?

This is a first draft! Of a sort, anyway. Its kind of a rewrite/revamp of a very old story, but this is the first draft of this incarnation…

07. Are you starting a new project (or draft) or continuing an existing one?

As I said above, this is a revamp of an old series of novellas of mine. I’ve had the plans for this novel for a long time and have been just dying to write it. So its a continuation of an old project, but in a pretty much entirely new format.

08. What is your favourite time to write in the day?

Late at night is my absolute favourite time to write. I enjoy getting up really early (especially in summer, or almost summer, as it is for me in November) but my brain just can’t write that early. For me, mornings are for getting up, enjoying the cool breeze, getting ready for work (if its a work day) and heading off. It may sound odd, but I really just can’t process the information needed to write at that time of day. But at night time, my brain is really alive, so late at night, after my siblings have gone to bed, I tend to put on an episode of a show, or put on a movie I’ve watched a few times and just write. I love it. In fact, the other night I was watching the 2017 Little Women TV series and writing and just thinking about how much I love November.

*deep breath* Okay, so that was all oversharing. I hope you enjoyed my ramble 😀

I mostly write either at my desk, on my bed or on the lounge chair in front of the TV. The desk is, objectively, the best place to write, but it’s also the least cosy, unfortunately.

Computer. There’s no way I could speed write a NaNo novel on paper.

11. NaNoWriMo is a huge commitment. How are you going to make time to write?

I don’t know. I’m just going to do what I can when I can. I’m also about to start a brand new (very physically demanding) job as well, so I guess just writing as much as I can on days off, and making the most of every opportunity. Hopefully I can do this.

(Please ignore the fact that I’m already 3k behind…)

12. Are you going to participate in local or online NaNoWriMo events? (e.g. kick-off parties in your regions, write-ins, virtual writing sprints…)

I never have and probably never will, to be entirely honest. Virtual write in type things don’t work for me (I prefer just to word war with a few friends), and I don’t think there’s many (if any) in-person events near me.

I live in rural Australia after all 😦

13. Do you write from beginning to end or do you skip around?

Beginning to end. Skipping around just confuses me. Occasionally, I’ll just skip a handful of chapters, but that only happens in extreme cases.

Planner to the core…but I’m kinda accidentally pantsing this book.

15. What will be your go-to NaNoWriMo snack?

These little rice cracker biscuits we get from our local Asian grocery store. They’re so good.

17. Any rewards for milestone achievements? For finishing NaNoWriMo?

100% I’m buying myself a tub of coconut ice cream as soon as NaNo is done. Also, as my tradition is, I’ll buy myself an album (probably a musical) in December 😀

Don’t burn yourself out over NaNo. Its really not worth it. Sure, you get cool bragging rights and a new novel draft at the end, but its not worth hurting your mental, physical or emotional health to do so. Hop over to one of my blog posts that I’m really proud of for more discussion on stress 🙂

19. How are you feeling about NaNoWriMo? Excited? Nervous? Terrified?

Well, NaNo has already started, and to be honest I’m not feeling much. I want to bring this new novel into the world, but the intoxication of the first few days has worn off, and the stress of the last few days hasn’t kicked in yet. So at the moment, I’m enjoying my novel and not thinking much about NaNo.

-And anyone else who is doing NaNo!