This is a really exciting day for me! I’m participating in a blog tour for my good friend, Kassie, who’s written this amazing book called Tattered Wings. I had the privilege to read this book for review and so I’m going to share my thoughts with you now!

(All opinions are my own. I received this book for free and I was not required to write a positive review) 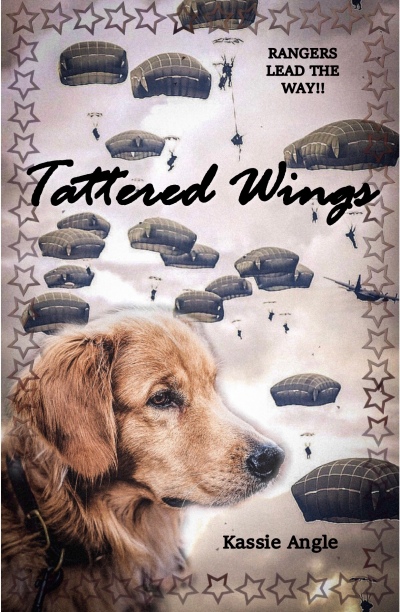 Some scars can’t be seen. And some can’t be hidden.

Layla Trent’s life is pretty much perfect, except for the little matter of a dog of her own—and maybe a brother. So why does a random nightmare of a princess dress, a hospital, and a stranger who’s definitely not her daddy feel more like an aching wound? And can a broken, glassy-eyed puppy somehow help her release the pain she didn’t even know she was carrying?

Corporal Andrew Reyes has proven he has what it takes to be the best—a US Army Ranger. But when a double tragedy rocks his world, his resolve is shaken to the core. What’s left for a man to live for when he’s lost everything he ever wanted to be? And is the sudden appearance of a teenage girl with a three-legged dog a cruel joke or a divine appointment?

Some scars can’t be hidden. But some don’t need to be.

Tattered Wings is the story of Layla, a young girl with a half-remembered past, and the three-legged dog who helps her to discover her heroes. Our characters in this story are, of course, Layla Trent, who’s sixteen years old and troubled by memories she gained as a toddler. Then there’s her dog, Ranger, who lost a leg in an accident and is now learning to live again. And finally, there’s Andrew Reyes, a young airborne ranger struggling with both mental and physical pain. Of course, there’s a bunch of delightful side characters, such as Andy’s younger brothers, his best friend Isaiah, and Layla’s dad. Of them all, Ranger was definitely my favourite, because I love dogs a lot, but of the humans, I liked Layla the best. She had a great character arc, where she matured a lot and learnt about the realities of war and the different scars it leaves, and I loved the scenes of her training with Ranger.

As far as plot goes, this story is short and sweet. It’s a straightforward tale of people finding healing through the means of friends, family, dogs and God and its pretty great. Kassie reiterates the themes several times, but rarely falls into preachiness.

Despite it’s subject and themes, this book is a lot of lighthearted fun. I found myself cheering for Layla, Ranger and Andy and I was thrilled with the ending. Definitely pick this up if you’re into military fiction, dogs or just want to support a young indie author.

Now that we’ve got that out of the way, I’ve got an interview with the wonderful Kassie herself coming up!

HELLO AND WELCOME TO THE BLOG, KASSIE! FIRST UP, WHAT ARE THREE THINGS WE MIGHT NOT KNOW ABOUT YOU?

I’m never good at this kind of question. XD I always say one of two things: I can recite the alphabet backwards and have been able to since I was about ten; and I’ve been indirectly struck by lightning. Now to come up with a third one… Well, chances are no one who hasn’t met me in person or talked to me on the phone will know this? I have a Midwestern accent. That’s not gonna keep me from saying I’m from Texas. But it is kind of awkward when other Texans call me out on it. X’D 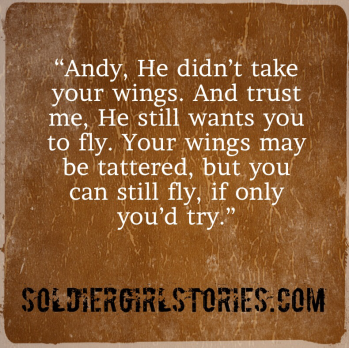 RECITING THE ALPHABET BACKWARDS IS DEFINITELY A SKILL! WHAT FIRST INSPIRED YOU TO WRITE TATTERED WINGS?

I’m gonna reiterate this so many times this week and it never gets old… Brad Paisley’s “Stubborn Angels.” I was making a music video for it in my head while we were driving and that mental image I somehow came up with of a double amputee running with a three-legged dog turned into Tattered Wings. <33

THAT’S PRETTY COOL, TO BE HONEST. ARE ANY PARTS OF THE STORY DRAWN FROM YOUR OWN EXPERIENCE?

Okay so…yeah. That could be a whole blog post on its own, if I actually wanted to write it. XP The short version of it is, I’m a soldier-turned-law-enforcement’s daughter who’s training a therapy dog and loves to run. So like, I am the main character? Kind of? Even though the storyline itself didn’t happen to me, some of the scenes did, or versions of them. Especially Ranger’s training scenes. And the whole thing with the Reyes boys making 18-wheelers honk. X’D 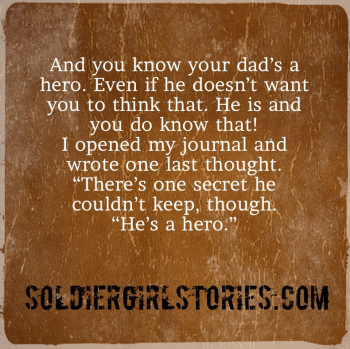 THE 18-WHEELER SCENE WAS HILARIOUS AND I LOVED RANGER’S TRAINING SCENES, AS A FELLOW DOG TRAINER, I LOVED HOW TRUE THEY RANG. WHAT IS THE STRANGEST THING YOU’VE EVER HAD TO RESEARCH?

What animal requires the least sleep, so that a character in my WIP could insult himself. Thankfully writing about stuff I’m pretty familiar with and borrowing a ton of library books has kept me from researching anything really unusual…but yeah, the amount of time I spent trying to learn that one… XP

NOW I’ M REALLY CURIOUS AS TO WHAT ANIMAL REQUIRES THE LEAST SLEEP! WHAT ARE SOME OF THE HIGHS AND LOWS YOU’VE EXPERIENCED DURING THE PROCESS OF INDIE PUBLISHING?

Ooh, that’s a good question. I kinda got swept into the indie publishing world on “accident,” so I don’t have your usual indie-author story. My definite high is hearing how people have had their hearts broken and healed and touched by my stories in more ways than I could ever have dreamed. The only real low I can think of are people not taking me seriously because I self-publish—y’all, it’s still a book. 😉

SELF-PUBLISHED STILL MEANS LEGITIMATE 🙂 DO YOU HAVE A PLAYLIST FOR TATTERED WINGS?

Of course!! It’s just on Apple Music so I can’t share it like I could on Spotify or something, but I’m posting about it on my blog in a couple days. 😉 I love it to death. 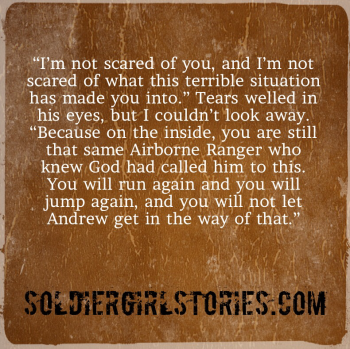 AWESOME, I LOOK FORWARD TO THAT. IS THERE A SPECIFIC QUOTE OR MUSIC LYRIC YOU ASSOCIATE WITH YOUR MAIN CHARACTERS?

IN TATTERED WINGS, THE CHARACTERS ALL GRAPPLE WITH DIFFICULT EMOTIONS AND SITUATIONS REVOLVING AROUND PHYSICAL, MENTAL AND EMOTIONAL STRUGGLES. HOW DID YOU COPE WHILE IMMERSING YOURSELF IN THEIR MINDSETS?

This question has been killing me because I never *really* stopped to think about it before—but I do really immerse myself in my characters. For one, my personality is naturally so empathetic it hurts sometimes, so I’m used to taking in and sorting out a lot of emotions. And writing is definitely an outlet for my own emotions…so maybe it’s more that I cope by immersing myself in their mindsets? Sometimes I need to know that they’ll be stronger by the end, even if that ending isn’t perfect; that God is still in control, if in fiction so much more irl. And in another way, I think maybe it’s like being an actor. You get into character and totally lose yourself in what your people are thinking and feeling (and I do actually act it out sometimes). Then you flip it off and go on with your own life. Sometimes I get myself really wound up, in which case I’ll usually work out to wear off all that energy, but…yeah. I kinda don’t know. It’s just a part of who I am. 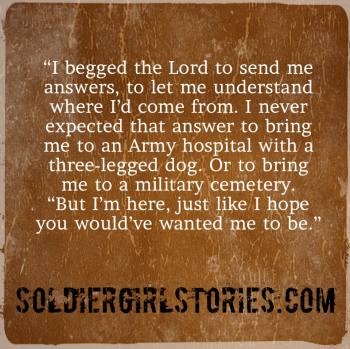 VERY INTERESTING. I’VE DEFINITELY FOUND THOSE SORTS OF TOPICS DIFFICULT TO DEAL WITH. WHICH IS YOUR FAVOURITE PART TO WRITE–BEGINNING, MIDDLE OR END?

Unpopular opinion: the middle. Everyone always say they get bogged down in the middle. I don’t. Getting into the beginning of a story is always hard for me because I don’t know my characters well yet, I don’t have a good grasp on their voice, and I’m not yet attached to them. By the end, I don’t want the story to be done and I’ll keep putting off writing in hopes of making it last a little longer. But in the middle, I’m absolutely in love with my guys, there’s plenty of action, and I can’t write fast enough to keep up with all my ideas. Writing the middle is the best, fight me. XP

WRITING THE MIDDLE IS HEAPS OF FUN 🙂 WHICH OF YOUR TATTERED WINGS CHARACTERS IS MOST LIKE YOU?

Layla… XD Just, Layla. Like I said, Laymie is basically me. I only describe two outfits Layla wears in the story and I own both of them. I love to run and sometimes I have to run to sort out my thoughts. Writing in my journal is a huge outlet sometimes. I have a golden retriever puppy I’m training as a therapy dog. Our biggest difference is that I spent most my life with my dad in the Army and only a short stint in law enforcement, whereas it’s the opposite for Layla. But yeah, we’re basically the same person. <33 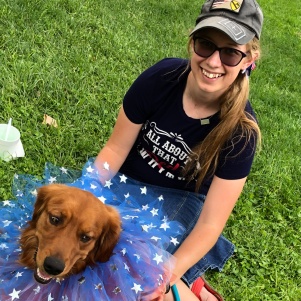 Kassie Angle is a teenaged Christian author, cowgirl, therapy dog trainer, stereotypical INFJ, and Army girl to the core. Her first love, i.e. debut novel, O to be Like Thee, swept her unsuspectedly into the world of indie authors. She tries to use her stories to fill the silences in literature, helping more people understand the world of the Army and showing how God heals the broken-hearted. You can find her and more of her writing at SoldierGirlStories.com.

THANK YOU FOR JOINING ME KASSIE, AND BEST OF LUCK WITH THE REST OF YOUR BLOG TOUR. CHECK OUT KASSIE’S BLOG HERE FOR THE REST OF THE SCHEDULE 😀