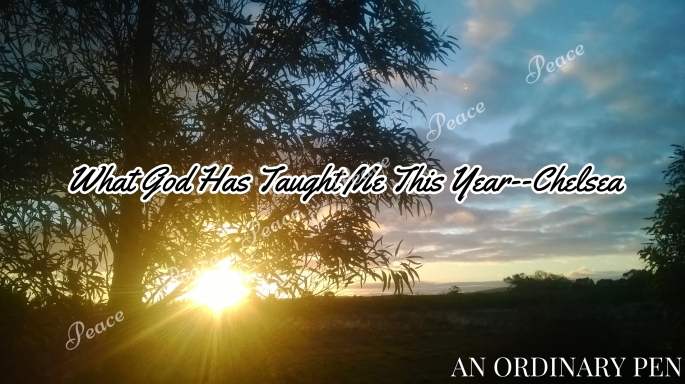 (I know that I promised this post on Sunday, but, as you’ll soon see, this past few days has been a hectic, horrible time and I honestly didn’t have the energy. However, since this post is also about Christmas, it seems appropriate to post it on Christmas Day).

“Christmas is a time of peace.”

Hands up everyone who has heard this phrase and rolled their eyes. Christmas? Peace? Those two really don’t seem to go together.

And yet, they do. If there was one thing God was teaching me this year, it was that peace is real, and that peace is promised to all those who ask for it.

Two months ago, my dad was admitted to hospital, severely ill. Several weeks—and every scan, blood test and examination imaginable—later, he was diagnosed with terminal cancer.

As the weeks dragged on and my dad’s health grew more and more precarious, I began to dread the approaching Christmas Day.

Call me a Grinch, Scrooge or a plain old cynic, but Christmas has never been a favourite of mine. I feel like a terrible Christian admitting it, but my only reason to like Christmas is the fact that I usually get free books on December 25. Other than that, Christmas can go away, as far as I’m concerned.

And, this year, added on top of my usual dislike, there was a cancer diagnosis, stressful commutes to Sydney and back, grief, tears, anger and questions.

And I really wasn’t feeling the Christmas joy, hope, grace or peace.

It’s hard to feel peace when you’re lying in a dry creekbed, literally lamenting the fact that drought and cancer seem to be sucking your faith away.

Everything about Christmas has always rung—at least to me—a little false. I’ve always been cynical about Santa, elves and even the supposed remembrance of Jesus’ birth. But a few weeks ago, I read through sections of the Christmas story narrated in Matthew and Luke, and I realised two things.

1)      Peace does not equal tranquillity

2)      That first Christmas was not a time of tranquillity.

Tranquillity means “calm and undisturbed”. It describes a sunset on a Hawaiian beach, or a lake in the middle of a wood, or a summer evening on a veranda.

Peace is something entirely different. Peace is inconceivable, unimaginable and every other synonym of those two words that you could imagine. Peace is what was born into fruition when Jesus Christ left His rightful throne in Heaven to be born of an unmarried, virgin girl from an obscure country town.

There was no tranquillity when Jesus was born—despite what the carols tell us.

The first Christmas spans approximately three years, beginning with Gabriel’s announcement of the impending birth of John the Baptist, and finishing with Mary and Joseph’s return to Nazareth.

The middle is not fit for a feel-good Christmas movie.

First of all, the Christmas story begins with doubt—Zachariah doubts that God can perform a miracle. Then it goes onto fear. Mary is troubled by Gabriel’s appearance. From here, it goes to an unmarried woman becoming pregnant, a literal death sentence according to the Law of Moses. And her betrothed attempts to divorce her.

You know the story from here. A decree goes out to all the known world. Mary and Joseph travel to Bethlehem. And Mary gives birth in what many people assume was a stable, before lying her newborn baby in a feeding trough, of all things.

A few nice things happen. Angels appear to humble shepherds and they come to worship Jesus. And then Simeon, a priest, tells Mary that a sword shall pierce her heart (though, he doesn’t mean a literal sword, as far as I can tell).

Now we have another familiar story element. The “three wise men”—or unspecified number of Magi—turn up at Herod’s court, a period of time later. They ask where the new king of Israel is to be found.

The chief priests tell them that Jesus is to be found in Bethlehem, and the Magi are made to promise that they’ll return and find Herod, to confirm the location of the new king.

The Magi find Mary and her child (having moved out of the stable and into a house) and they fall down and worship him. Later on, angels appear to the Magi, warning them not to go back to Herod. So “they depart to their country by another way”.

I can’t remember when I first heard the rest of the story, but it certainly isn’t included in most Nativity sets or Christmas movies.

When Herod figures out that he’s been tricked, Joseph is warned by angels to flee into Egypt. He, Mary, and Baby Jesus, do so. They become political refugees in order to preserve the life of this small child and to fulfil a prophecy “out of Egypt I called my son” (Matthew 2:15)

And now, Herod exacts his revenge. He orders all the male children under two years old to be slaughtered. This fulfils another prophecy: “A voice was heard in Ramah, weeping and loud lamentation, Rachel weeping for her children, she refused to be comforted, because they are no more.”

I’m sorry, but by no stretch of the imagination could this story be called tranquil, calm or particularly bright.

And yet, despite all this, it is full of peace.

The Peace of God is described as passing all understanding (Philippians 4:7), and few places illustrate this better than Mary’s Magnificat (Luke 1:46-55).

Gabriel had revealed God’s plan to Mary, telling her that she would conceive and that her child would be the Son of God, however, God’s plan was not revealed to the world at large. Everyone, including Joseph, assumed that Mary had committed adultery, for which severe penalties (death) were laid out in Leviticus 18 and 20* (*though I believe the Jews did not have the authority to sentence someone to death at the time, hence why Jesus was taken to the Romans to be executed).

Despite knowing she could be shunned and left alone and helpless—an outcast—Mary did not shy from the task God gave her. She asked questions, but she trusted in God’s ability to care for her. And her Magnificat, which she sings whilst visiting Elizabeth, is an expression of profound peace and joy.

See, that’s where peace comes from—a trust in God. When Mary exclaims, “Behold, I am the servant of the Lord, let it be to me according to your word”, she expresses trust in God. She may not understand why God is using her, or why He is choosing such a way, but she understands that she is God’s servant and she surrenders herself to Him.

This gives me hope. When I lay at the bottom of a dry creekbed, angry, hurting, with tears streaming down my face and sobs literally shaking my body, I did not understand what God was doing. I could not understand what God was doing, I didn’t know how the suffering of so many people, those trapped in Australia’s drought, or my dad’s pain, or my family and friends’ heartbreak, could ever possibly be something used for good.

And yet, I walked away from that creek with peace in my heart.

Peace does not negate grief. Jesus is the Prince of Peace, the source of all peace, and yet his birth caused the deaths of an incalculable number of innocent babies. When I sat with my dad yesterday, holding his hand and saying goodbye, unsure of whether I would ever see him again before the Resurrection, I felt grief that I can’t even describe. But I also felt peace.

I cannot see the purpose behind the so-called “Massacre of the Innocents”. All the weeping, grieving families could see was the horrible, unimaginable, unjust deaths of their sons. But the Prince of Peace had come into the world.

And even he felt pain, grief and sorrow—Jesus wept at the news of his friend’s death, after all.

Peace is what God has taught me this year. He has taught me that peace is not tranquillity, but something wilder, stronger and more powerful. It can coexist with grief. It is comfort beyond anything we can imagine. It is all right to grieve at Christmas time. You don’t need to plaster on a smile, and exhibit some fake Christmas cheer. Christmas isn’t about tranquillity or happiness. It’s about peace and joy.

The first Christmas was raw, messy and bloody, and yet full of hope, joy, love and wild, fierce peace that passes all understanding. God has taught me peace in a world that is cruel and unfair. There is no better light than that of someone who has peace, even amongst the cruelty and sadness of this world.

(Four days ago, I learnt that—at the same time I was writing this—my dad died. I believe he is with our Lord and Saviour now, and there is no greater peace than being in the presence of God).

Has this year been a year of trial for you? In what ways has God shown you His peace? What are your favourite Bible verses dealing with the themes of peace and trust? (and next week, of course, we’ll be welcoming the wonderful Christine to the blog, to wrap this year’s posts up).

19 thoughts on “What God Has Been Teaching Me–Chelsea”