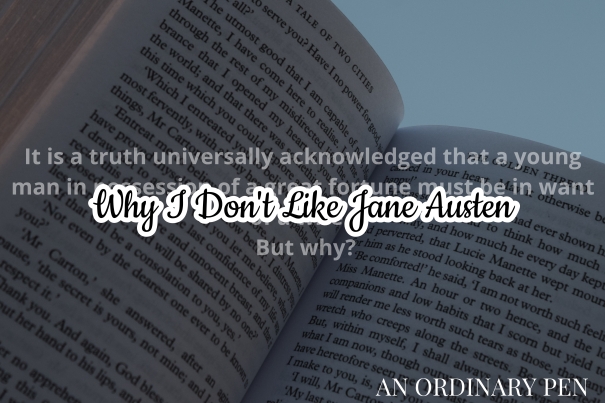 The title made you click on this post, didn’t it? You’re probably wondering how on earth could someone hate Jane Austen??

Well, I don’t hate Austen. She has an unique and humorous writing style, which I appreciate. She is a master of wit and sarcasm, she wrote interesting female characters at a time in history when women in fiction were usually cardboard cut-outs (even Dickens, who wrote his novels decades after Austen and who is remembered as one of history’s greatest authors, still had a very weak grasp of interesting female characters, in my own opinion).

However, I mentioned a while back that I greatly disliked Pride and Prejudice when I read it, so I thought I would elaborate a little bit on why I didn’t like it.

So, why didn’t I enjoy Austen (specifically, Pride and Prejudice)?

I started reading Austen’s classic some time last year. I was listening to it as an audiobook, but over halfway through, my loan ran out and I had to return it. I later borrowed from the library it as a paperback, read one page and then threw it across the room (metaphorically, not literally. I respect classics too much for that). I’d had enough, so I moved on.

But for several months, I couldn’t put my finger on why I hated it so much. All I could do was rant about it’s incredible boringness. (As a side note, I still hold that it was an incredibly boring book, however, that wasn’t my core issue. Les Miserables and Anna Karenina can both be extremely boring in parts, but I still enjoyed them a lot.)

Finally, after reading Jane Eyre (which, to my absolute surprise, I really loved!) I found a quote by Charlotte Bronte, in which she explained why she couldn’t stand Pride and Prejudice.

Bronte (who had been told that she should try writing more like Austen), replied, in essence, that there wasn’t enough emotion in Austen’s writing. I found myself agreeing with her.

So, there were three main reasons that I didn’t like Austen’s writing:

1.   Lack of Connectibility (Look, I just created a new word!)

Because of this lack of emotion, Austen failed to make me connect with Elizabeth, or Darcy or anyone (except dear Mr Bingley).

As I’m writing this, I’m multitasking and reading an article on Kingdom Pen by Josiah DeGraaf, in which he says:

First, form a bond between readers and the protagonist as quickly as possible. The sooner readers care about and empathize with the protagonist, the better. One of the best ways to accomplish this is to reveal a key flaw or weakness.

I felt no bond with Elizabeth and I didn’t care what on earth happened to her. Does Elizabeth have any flaws other than an ingrained prejudice and an uncontrollable tongue? I don’t know. In no way could I relate to Elizabeth, and maybe the only thing we have in common is a love of books.

If you’ve already forged an emotional connection between readers and the protagonist, the protagonist’s inner turmoil should move readers and force them to consider how they would respond to the dilemma. These choices are often at the center of a novel’s theme.

Because I couldn’t connect with Elizabeth, I also didn’t care about her dilemmas. For all I cared, she could settle down with Wickham. Because I didn’t care about Darcy, I didn’t desire him and Elizabeth to understand one another. I don’t live in Regency England. I don’t live in a world where marriage is seen as the only option for a woman, I’m not interested in romance at this stage of my life. My house isn’t in danger of being left to an incredibly annoying cousin, my sister hasn’t been jilted, I’m not a misunderstood, brooding rich man, I’m not caught up in my featherbrained little sister’s scandal. None of those things have happened to me, but Austen should have been able to make me feel like they have and are happening to me.

There was nothing which made me want to keep turning the pages. Nothing to hold me in suspense.

I don’t like superficiality, either in real life or in fiction. I don’t stand around and gossip and find it interesting in real life, so I don’t enjoy sitting and reading about it. I don’t like small talk, and I don’t care who is going to the formal (or the Regency ball) with whom.

E.g. Not Pride and Prejudice.

I hear a lot of people talk about the satirical social commentary that Jane Austen hid beneath her ball gowns and gossip. I personally found nothing enlightening. Making fun of Regency English traditions does not appeal to me in the same way that a book dealing with resurrection, justice and self-sacrifice does.

And yes I know. The actual point of the story is about how pride and prejudice affect relationships and blind us to seeing who someone really is. That’s a perfectly good theme, but the same theme is dealt with in The Scarlet Pimpernel (in a way that is much shorter and more interesting, where the dancing actually has interesting conversations. And I’m probably in the minority here, but I’m going to marry Percy Blakeney before I marry Fitzwilliam Darcy).

So, those were the two main reasons I disliked Pride and Prejudice. There were a few other ones as well. Whilst I enjoy sarcasm, I get tired of it very quickly, and I felt like there was an overload of witty comebacks. I also cannot understand Darcy and I wonder what happened in his life that made him so cynical and critical of the world. I don’t like romances in the first place (one wonders why I chose to pick it up then? I don’t make any sense sometimes). Dancing is a lot of fun to do and watch, but it loses it’s magic on the page, so don’t write about balls too often. Etc.

Anyway, I’m sure I’ve forgotten something, but that’s all for now. My rant is complete *bows* *runs away from the things sure to be thrown*

What do you think of Pride and Prejudice?Do you enjoy Jane Austen? Why or why not? I’m always eager to hear another opinion!